Changing of the Guard in Sunshine Coast Retail

The retail sector on the Sunshine Coast is bucking the trend of some capital cities with burgeoning demand for quality high-traffic space and an evolution of the retail mix.

From Caloundra to Noosa and everywhere in between, the resurgence of retail can be seen in the enthusiasm of buyers and lessors and the willingness of landlords to invest in upgrades to meet a savvy market.

While revenue for retail property owners across the country declined over the past five years due to subdued trading conditions caused by the pandemic, revenue is forecast to recover over the next five years.

The Sunshine Coast is showing signs of a strong recovery already, with fierce competition returning many rental rates to pre-COVID highs.

Ray White Commercial Principal Paul Butler said that changing demographics were influencing the mix as more people moved from the south and the north to take advantage of the coast’s lifestyle and opportunities.

“We are seeing a change in guard in the style of retailers across the region. Younger brand names and labels were proactive in taking up new space and opening stores earlier on in the recovery while traditional bigger retailers tended to wait,” Paul said.

“Nimble groups that read the market well jumped in and made a move for tourist destinations earlier, securing prized tenancies as they became available.” Hastings Street,  Noosa Junction, Coolum, Peregian Beach, Maroochydore, Mooloolaba, Moffat Beach and Dicky Beach retail each have their own idiosyncrasies but share one thing in common – a change in the retail mix over recent years.

Noosa Junction has emerged as a thriving commercial hubfuelled by a flourishing hospitality sector and owners and tenants dedicated to building a vibrant and welcoming atmosphere.

In smaller villages including Moffat Beach and Dicky Beach businesses have transitioned to more up to date offerings reflecting the new demographics of the area.

The era of curated retail is upon us with developers and investors committed to finding the right mix of retail and services to suit the local demographics.

“We recently had an owner-developer with ten shops to fill. He decided to follow a theme and create a boutique fashion hub that people would visit not only to buy clothes but to spend time. That meant incorporating a food element to attract people at different times of day, a florist and a hair salon as well as a lifestyle type store,” David said.

“As we deal with so many residents, owners and the general public daily, we have a good understanding of what people are looking for in a location and the types of operators they want to see.”

“We’re constantly searching for retailers who have been successful elsewhere and inviting them to branch out and try new spaces. It’s about being active and paying attention to what’s missing and to new opportunities.” 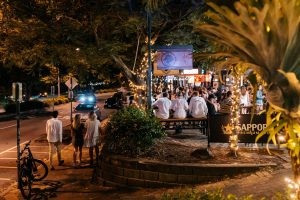 Food and Beverage is Back

Everywhere you look around the coast, creative food and beverage outlets are popping up. From hospitality venues offering retail (think bars offering their own craft brews as takeaways) to coffee machines installed in fashion retailers (“Surf and Coffee” in Coolum comes to mind), the boundaries between retail and hospitality are being blurred like never before.

Expansion of the Beauty Industry

“There is no doubt the local beauty industry is growing,” Chantel said. “There appears to be an exodus of people from large companies setting up their own businesses and changing the industry as we know it.” 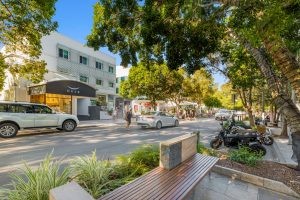 Despite CBD retail being under pressure, many luxury retailers are seeking to grow their brick-and-mortar footprint in tourist hotspots according to Paul Butler.

“In  Hastings Street  alone, I can think of at least six nationals chasing space right now but there are only two shops left at either end of the space, both of which are too small for nationals.”

“National retailers are definitely active out there and the presence of Mecca’s resort-style concept store encourages other high-end retailers into the Hastings Street strip.” The Growing Potential of Caloundra

Caloundra, the Sunshine Coast’s “City of Beaches” is emerging as an area of significant retail potential due to its unique position as the region’s southern gateway and close proximity to the growing population at Aura.

Recent Bulcock Street upgrades and planned developments including the Paloma Paloma apartments at the top end of Bulcock Street and a new town square are generating new possibilities according to Caloundra Commercial Property Consultant, Adam Morley.

“Bulcock Street is looking great with new trees, gardens and footpaths. Several proactive landlords are beginning to invest in building upgrades and getting better quality tenants and better results. We’re seeing some really good operators from other areas starting to show interest as well as enquiries from retailers considering moving out of shopping centres due to higher rents,” Adam said.

Agents Brenton Thomas and Rian Pinker have noticed a substantial increase in commercial activity in Caloundra and surrounding suburbs recently.

“Both retail and food outlets have seen improved trading over the past two years and more diverse operators are showing an interest in being part of the growing local hospitality sector,” said Brenton.

Across the coast, new and refurbished retail spaces, particularly those in prime positions, are being “snapped up like hotcakes” according to David Brinkley.

“Tenants are expecting a better standard these days. They’re wanting to see properties presented well before signing a lease. There’s more collaboration between owners and tenants on presentation and owners are getting more hands-on with fit-outs, working alongside their tenants for a better outcome,” David said.

Despite all the challenges faced by retail over the past few years, there is evidence to suggest that Sunshine Coast retail remains robust and is evolving alongside changes in the market.

Owners who invest in upgrades and renovations, particularly to older premises, should see higher returns over the coming years as tourism and population surges place additional demand on existing assets.

For a chat about the current commercial market or for any enquiries, contact our team on:

Back to all news
Up to Date