Trading for over 20 years, the well-known Canteen cafe at Noosa Heads is up for sale.

Located at the busiest end of Noosa Junction at 2/4 Sunshine Beach Road, Ray White Commercial Noosa & Sunshine Coast North agent John Petralia said the licenced business included all the fixtures, seating for up to 70 people, and is fully staffed.

“The business and menu have been developed to suit the Noosa market, resulting in a strong year-round local clientele, topped up by the holiday crowds,” Mr Petralia said.

“This long tenure has also allowed the owner to successfully run the business under management for many years.

“This adds to the growth potential for a new owner by allowing them to step into the business (if they wish) to reduce costs and increase profit.

“There is a huge opportunity for the new owner to open at night and pick up on the thriving night time trade in the Junction.” 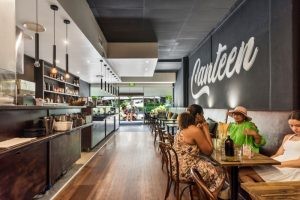 Mr Petralia said the Noosa Junction dining scene had really “taken off” and had become very popular with locals and tourists.

“The last two years has seen a significant increase in tourists to the region which has resulted in low vacancy rates and lots of hungry people,” he said.

As the business is currently being run under management, Mr Petralia said it would suit a range of buyers.

“An experienced cafe/restaurateur could build on the solid base that has been created,” he said.

“Or, because it is run under management, someone who is newer to the industry can step in and the business will continue to run while they build on their knowledge and confidence.”

For further details contact John Petralia on 0414 812 719 or john.petralia@raywhite.com

What’s the Outlook for Sunshine Coast Commercial Property in 2022?

Back to all news
Up to Date